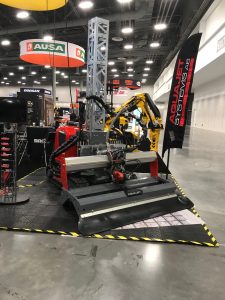 Click on the image to see the Infinity oscillating head in action.

Aquajet introduced new technology for the hydrodemolition market at the 2022 edition of World of Concrete, held this week at the Las Vegas Convention Center. The company’s Aqua Cutter 750V hydrodemolition robot is the launch model for its new, patented Infinity oscillation head.

The nozzle head moves the water jet in an infinity (figure 8) pattern, increasing the amount of concrete removed in a single pass while also reducing shadowing, eliminating the risk of pipe holes and providing a better bonding surface for the subsequent repair.

The 750V also features the company’s next generation Evolution 3.0 Control System that includes additional functions over prior generation technology, including the ability to automatically calculate optimal settings for lance motion for greater precision and efficiency.

Like all Aqua Cutter Robots, the 750V cleans and descales rebar without causing microfracturing. Its horizontal, vertical and overhead reach make it suitable for a wide variety of concrete removal tasks, such as renovation and bridge and road repair.

“Aquajet has always been at the forefront of hydrodemolition innovation,” said Roger Simonsson, Aquajet’s managing director. “Infinity oscillation is the next technological evolution, and it is changing how hydrodemolition contractors think about productivity. In the coming years, we will see it replacing rotating lances and similar tools to become the new industry standard.”