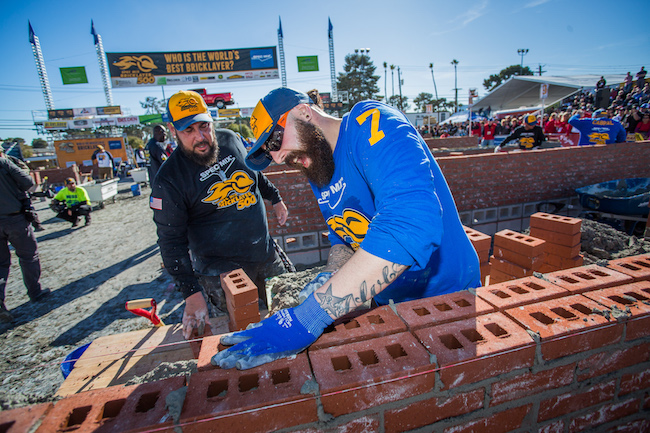 LAS VEGAS—A 30-year-old mason from Hamilton, Ont. spent 60 tense minutes Jan. 23 locked in a battle of speed, skill and stamina with more than two dozen rivals from across the U.S., Canada and Australia.

Dexterously throwing down brick to build up his eight-metre-long (26-foot-long) wall as high as possible over the single hour, Mario Alves emerged from the 2019 Spec Mix Bricklayer 500 World Championship as the first Canadian to win what’s known as the “Super Bowl” of masonry.

Mario Alves, along with mason tender Michael Alves, both of Hamilton’s A&M Masonry, topped 22 teams from across the U.S., three from other Canadian provinces and a single Australian squad to claim victory. The duo had placed 760 bricks when time expired on a cool Las Vegas afternoon, edging out the closest competitors by just 11 bricks. 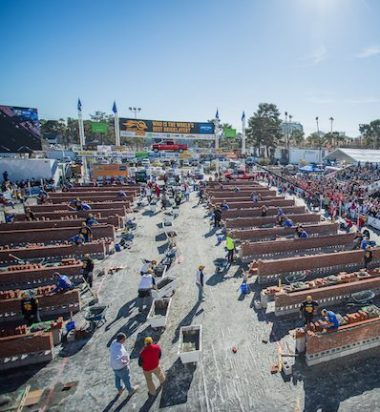 The competition from above. PHOTO: Stu Mullenberg/Spec Mic Inc.

The 2019 event at the World of Concrete trade show was the 17th iteration of the bricklaying competition, which up until now had seen only Americans carry off the championship trophy. Along with working quickly, masons must stay within a series of strict workmanship guidelines, as judges will adjust a team’s final brick count if they deem certain aspects of the wall unsatisfactory.

Mario Alves followed his father into the bricklaying trade and has competed in regional competitions for about seven years. He’s made a pair of previous trips to the national competition, but failed to place. Ahead of this year’s championship, he said the previous experience and a bit more maturity had taught him more about what he had to do to “get the job done.”

Related
Calling all crews: show off your best project in concrete or masonry to win a trip to WOC 2013