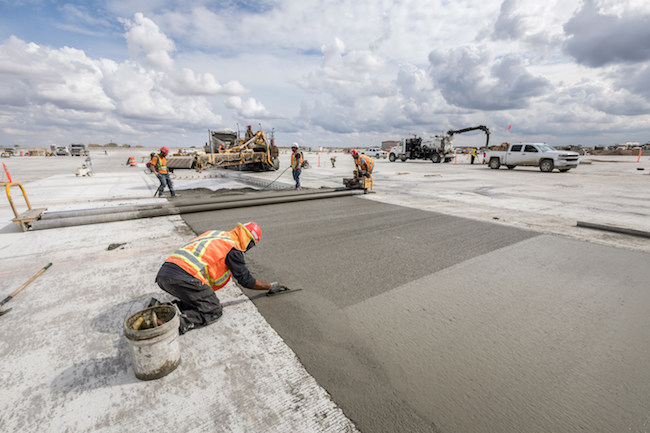 Crews poured concrete for the apron project at the Calgary airport over an approximately two month period. PHOTO: CarbonCure Technologies

With temperatures routinely falling into the negative double digits, deicing planes flying out of the Calgary International Airport is a major priority through much of the winter. Mobile deicing crews previously shuffled from gate to gate to prepare planes ahead of departures, but the recent addition of a new deicing pad at the Western Canada airline hub has centralized the process.

The major construction project also hit a new Canadian high water mark for the use of an increasingly popular concrete technology capable of trapping carbon dioxide.

The pouring process for YYC ‘s East Deicing Apron took about two months and required 25,300 cubic metres of concrete. All of that concrete was produced using Nova Scotia cleantech firm CarbonCure’s technology that injects CO2 into the concrete during the mixing process. The process sequesters the greenhouse gas, which is taken from waste streams at industrial facilities, lowering the overall carbon footprint of the concrete.

“This is yet another instance of CarbonCure concrete easily meeting rigorous performance standards, including the top-tier design and engineering standards required for airport paving,” Robert Niven, the company’s founder and CEO, said in a release. 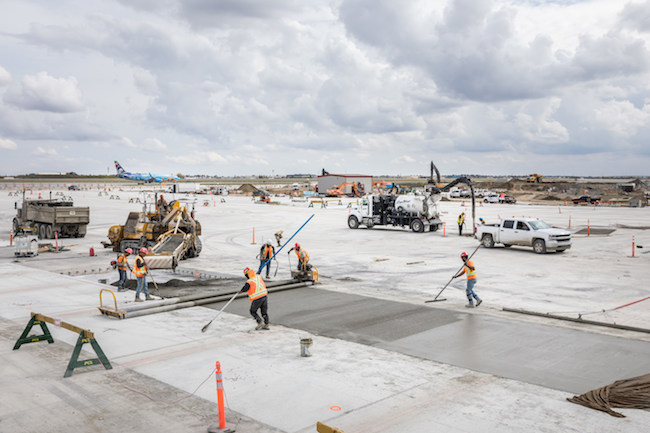 PCL served as the general contractor for the East Deicing Apron, employing an on-site batch plant to produce a steady stream of concrete at the airport in August and September last year. Outbound planes have begun using the new deicing facility in recent weeks.

In terms of emissions avoided compared to conventional concrete, the project trapped 160 tonnes of CO2, translating to the amount absorbed by a 209 acre forest over the course of a year, the company said. While CarbonCure’s process does not offset the emissions generated during the cement manufacturing process — a major contributor to climate change — it lessens the carbon footprint of concrete.

Since its inception in 2007 CarbonCure has locked approximately 57,000 metric tonnes of CO2 in its concrete. The East Coast company continues to scale up, partnering with a number of major producers in North America and beyond. Currently, it’s expanding its network through Europe and Southeast Asia.