Lehigh studying carbon capture at Alberta cement plant, targeting up to 95 per cent of CO2 emissions 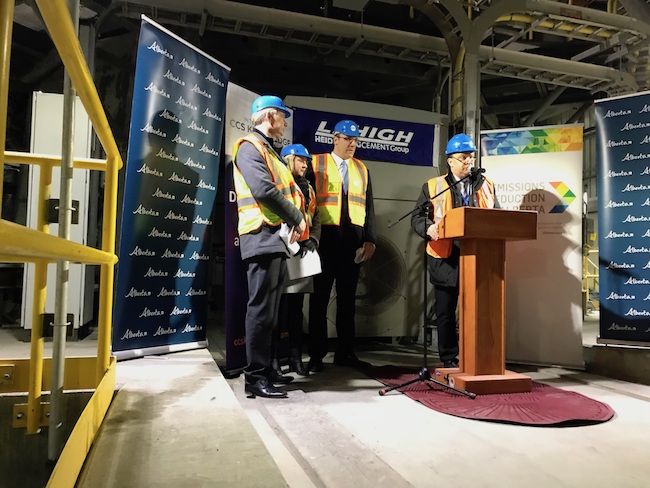 A new study into the feasibility of commercial-scale carbon capture technology got underway last week at the Lehigh Cement plant in Edmonton.

Lehigh has teamed up with International CCS Knowledge Centre, a group founded by Saskatchewan utility SaskPower and mining firm BHP, on a project aiming to capture between 90 and 95 per cent of the carbon dioxide from flue gas at the cement production facility. The partners said it’s the first time in North America a full-scale carbon capture solution has been explored at a cement plant.

A subsidiary of the HeidelbergCement Group, Lehigh produces a range of cement products — the majority of which are used to make ready-mix concrete for construction. While concrete is a fundamental building material, it’s also a well-known source of carbon emissions. The energy-intensive cement production process is mainly to blame for this.

The new study builds on some of the lessons learned at the Boundary Dam 3 CCS Facility, which saw saw carbon capture technology installed at a coal plant near Estvan, Sask. in 2014. Though successful in capturing 90 per cent of the plant’s CO2 emissions, the project was costly and SaskPower has not yet retrofitted further coal plants with the technology.

At the Lehigh facility, the study includes design, cost estimates and the mapping out of a business case for the use of carbon capture. A pre-feasibility study has already been completed and Lehigh estimates the project could capture 600,000 tonnes of CO2 each year.

The company said capturing post-combustion flue gas from the cement plant will be similar to how the gas is captured at the Saskatchewan coal generating station.

The government of Alberta, through Emissions Reductions Alberta, has agreed to contribute $1.4 million to the project. The total cost of the study is approximately $3 million.