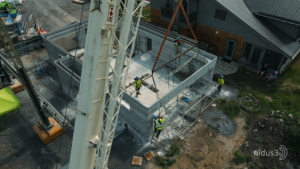 While Canada and the U.S. have had several 3-D printed buildings constructed in recent years, to this point, all have been single-storey buildings, but Canadian 3-D construction printing company, nidus3D, is reaching ever-higher. The company has printed the first multi-story 3-D printed building in North America, a two-storey building on Wolfe Island, near Kingston, Ont.

The company used the BOD2 printer from COBOD, whose technology was used to 3-D print the first two- and three-storey buildings in Europe. The BOD2 can print with real concrete with a particle size up 10 mm and makes use primarily of locally found raw materials.

The two-storey building is the second structure nidus3D has built. The 2,300-square-foot mixed-use space features a studio on the ground floor and a residence above. Of particular interest on this build was a 3-D printed horizontal beam that was printed on site and lifted into place by a crane.

“We have critical shortfall of skilled labourers, and a massive and growing demand for housing all across Canada,” said Ian Arthur, a co-founder nidus3D. “If we do not begin to look at new ways of building, we’re never going to catch up. It is part of our core values, to seek solutions to address the housing crisis and to help build affordable housing with the help of 3-D printing.”

The use of 3-D concrete printing allows structures to be built quickly. The complete two-storey building took only 80 hours to print, down from the 200 hours nidus3D needed for its first build, and the company is convinced that future buildings will be made even faster.