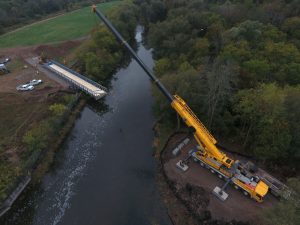 An aerial of the Acrow bridge during installation. Credit: Acrow

Provided by bridge engineering and supply company Acrow Bridge, the structure was used to carry pipes across Ontario’s Speed River and provide a safe passage for workers. Acrow’s bridges are most commonly used for vehicle or recreational applications.

Construction on the modular steel bridge began on Sept. 25, 2017, and the assembly and launch of the bridge was completed five days later. The temporary structure was in service for about six weeks.

“The Acrow Bridge was a good fit for the project. We liked the on-site speed and ease of assembly,” said Ryan Wilbur, project manager at Facca.

The rented structure was 48.8 meters long and 3.6 meters wide. It was able to carry two 460 millimetre diameter pipes, with a load of 3.2 kilonewton-metres. The bridge was assembled on rollers and pushed half way across the river. A crane was positioned on the far side to receive the bridge. No work was required to be done from in the water at any time.

Other methods were considered to span the gap during the renovation process, including the development of a cable-stayed tower to run pipes suspended across the river – a commonly used method by utility contractors. The alternative solution provided a fixed-cost option, on-site speed and ease of assembly, according to Acrow.

“The components that make up the 700XS Acrow Panel Bridge are by definition ‘versatile,’” said Ken Scott, president of Acrow.

The wastewater facility is located in the neighbourhood of Hespeler. As part of the upgrade, it was determined that the existing bridge, which supports utility pipes over the Speed River, was in need of rehabilitation.