Shovels expected in the ground this year on project to build new bridge, twin Hwy. 15 northeast of Edmonton 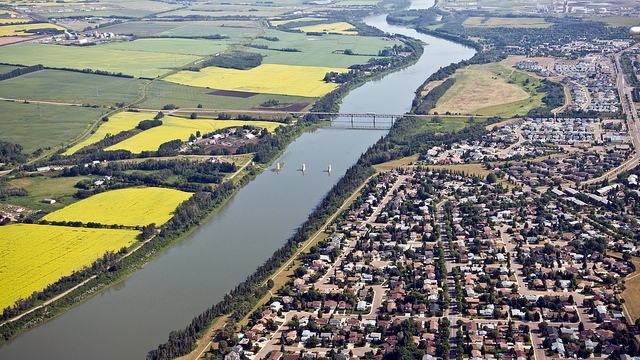 The bridge over Highway 15 in Fort Saskatchewan. PHOTO: Government of Alberta

EDMONTON—A project to twin a stretch of Alberta Highway 15 and build a new bridge over the North Saskatchewan River northeast of Edmonton is expected to start this spring.

The province says traffic crossing the current two-lane Highway 15 bridge into Fort Saskatchewan has jumped 50 per cent in the past decade, leading to worsening gridlock and an increasing number of accidents. The new bridge and related road twinning project aim to counter the higher traffic volumes and speed up the flow of goods from nearby industrial facilities.

Construction is expected to start in two phases this spring.

The first phase involves twinning a three-kilometre stretch of Hwy. 15 just west of Fort Saskatchewan between Hwy. 28A and Highway 37.

The second, more substantial portion of the project, will see the remaining two-lane segment of Hwy. 15 twinned and a new bridge erected over the central Alberta river. The original bridge, built in 1957, will remain standing, but be converted to a westbound-only crossing. A new two-lane eastbound bridge, which will also include a pedestrian walkway beneath the main span, will go up adjacent to the existing bridge.

Design work for the projects began in 2017 and crews are expected to start early prep work this spring.

The province says construction could begin as early as this summer pending environmental approvals, land acquisition and the completion railway and utility work.