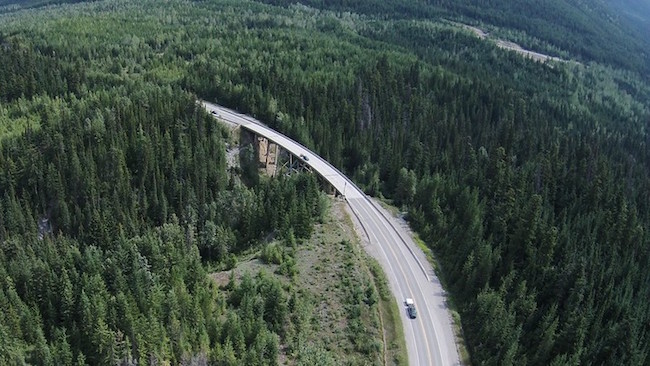 Widening the bridge is part of a $1 billion Trans-Canada upgrade project. PHOTO: Government of B.C.

Pennecon Heavy Civil Ltd. has won a $61.5 million contract to replace an old two lane bridge along the Trans-Canada Highway west of Golden, B.C., with a new four-lane span.

B.C.’s Ministry of Transportation and Infrastructure said project includes construction of the new 185-metre bridge over Quartz Creek, as well as 4.4 kilometres of highway widening.

“This project will really benefit people who live and work in this region as it will expand the two-lane crossing to a modern four-lane bridge, making travel safer and easier for all drivers, including commercial truck drivers carrying essential goods,” said Rob Fleming, the province’s minister of Transportation and Infrastructure, in a release earlier this month.

The bridge replacement is part of a $1 billion provincial commitment to upgrading the Trans-Canada, also known as Highway 1, to four lanes between Kamloops and the Alberta border. The total cost for the Quartz Creek project totals $123.7 million, with the federal government pitching in $49.9 million.

Construction is slated to start this spring and reach completion by mid 2024.