‘Nation-building’ or folly? Project to build costly tunnel between Labrador and Newfoundland resurfaces 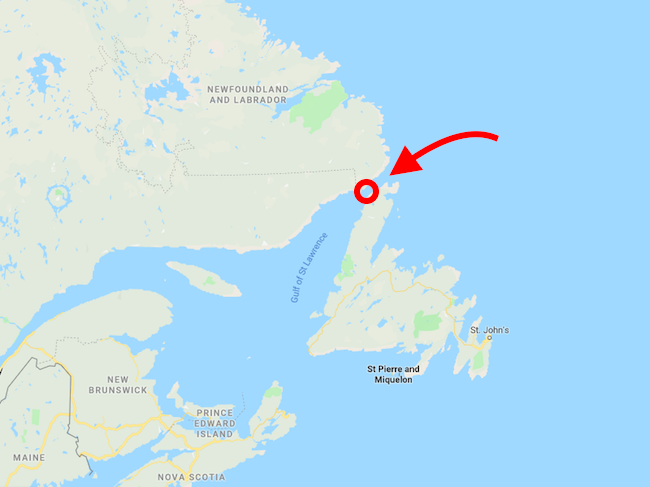 The approximate location of the potential tunnel. The route under the Strait of Belle Isle is about 18 kilometres. PHOTO: Google

ST. JOHN’S, N.L.—The federal Liberals’ campaign platform has rekindled discussions of a costly proposal to build a tunnel connecting the island of Newfoundland to Labrador.

The platform released Sept. 29 makes only one specific reference to Newfoundland and Labrador, in the context of a proposed National Infrastructure Fund for projects that connect different regions of Canada.

The party says the fund will support “projects like the Newfoundland-Labrador fixed transportation link” to give Newfoundlanders a secure way to travel to and from mainland Canada.

The Liberals say the link, mulled over by provincial politicians for decades, would make food and household goods more affordable for people living on the island.

“It can happen. We can make it happen,” Liberal cabinet minister Seamus O’Regan, running for re-election St. John’s South-Mount Pearl, said of the fixed link on Twitter.

The Labrador link has been championed as a solution to inconsistent ferry service, offering shorter travel time for truck drivers and residents, as well as the potential to draw in tourism dollars.

Last spring, Newfoundland and Labrador’s Liberal government released a feasibility study, the second on the concept since 2004, that priced an underground rail link beneath the Strait of Belle Isle at about $1.7 billion over 15 years.

In the report by Memorial University’s Leslie Harris Centre of Regional Policy and Development, the proposed design involved a single rail line with cars carrying 197 vehicles one direction at a time. It estimated it would take between 30 and 80 minutes to cross the strait, which is 18 kilometres across and between 25 and 110 metres deep at the proposed site.

Researchers said further study would be necessary to gauge interest from residents and estimate traffic numbers.

Premier Dwight Ball touted the concept as “nation-building” with benefits for all Canadians, comparing it to the Confederation Bridge that links New Brunswick and P.E.I., but echoed past premiers by saying the province could not fund the project on its own.

Over the last year, the costly bit of infrastructure has generated some buzz in Ottawa. A standing committee report on a Canadian transportation strategy, published this June, recommended that Ottawa, Newfoundland and Labrador, Quebec and the private sector “work toward” building the fixed link.

But the idea is not without its critics, some of whom question the practicality of the Liberals’ proposal.

“This promise shows a remarkable ignorance of the fiscal situation in our province,” said Alison Coffin, an economist and leader of the province’s New Democrats.

She said the link is a good idea in theory but it’s not where federal money is most needed, pointing to other areas of tangible need like road repairs or funding for a new penitentiary.

“I have a number of concerns about a fixed link being a good idea when we have so many other pressing problems that require immediate attention,” said Coffin.

One such issue is the looming financial spectre of the $12.7 billion Muskrat Falls hydroelectric project in Labrador, which makes up about a third of the province’s debt.

Newfoundland and Labrador’s government says it needs $200 million in federal money to soften the blow on ratepayers from the dam’s inflated costs.

Coffin said prime minister Justin Trudeau’s hesitation to publicly commit to the $200 million speaks to the likelihood of him committing billions for an underground tunnel if re-elected.

Russell Alan Williams, a political science professor at Memorial University of Newfoundland, said federal assistance would be a game-changer for the fixed link, which is well out of the cash-strapped province’s price range.

But he said the announcement, as vaguely described in the Liberals’ platform, doesn’t qualify as a promise as much as a fantasy story, intended to shore up votes in a region that elected all Liberal MPs in 2015.

He said studies on the link haven’t gone far enough to cost the necessary repairs to highways and roads in Newfoundland and Quebec, and suggested federal money would be better spent helping the province tackle rising health-care costs.

“I see this as a largely symbolic announcement … really coming from a place that assumes that Newfoundland voters are gullible enough to believe that there will be a magic tunnel to the mainland if they vote for the Liberal party,” Williams said.