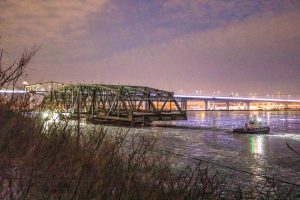 The main steel span of Montreal’s original Champlain Bridge over the St. Lawrence River was placed on an assembly of two barges and sits at the dismantling site.
(Photo courtesy of JCCBI)

The main steel span of Montreal’s original Champlain Bridge over the St. Lawrence River has been removed. That was a major step in the deconstruction and dismantling of the bridge’s steel structure, undertaken by The Jacques Cartier and Champlain Bridges Incorporated (JCCBI) and Nouvel Horizon Saint-Laurent G.P. (NHSL).

This large, suspended span, which had been part of the bridge for over 60 years, was detached from the bridge structure overnight, followed by an hours-long descent of the enormous 117.5-metre-long, 2,200-tonne component.

With strand jacks installed on anchor spans on each side, the span was lowered 33 metres onto an assembly of two barges in the middle of the seaway. This step could only be done at this time of year as there are no commercial shipping activities in the seaway. Even with shipping at a standstill, the operation still required optimal weather conditions as well as the coordinated efforts of about 50 people.

“The dismantling of the steel structure that crowned the original Champlain Bridge for the last 60 years marks a significant milestone in this major deconstruction project,” said the Honourable Dominic LeBlanc, Quebec’s minister of Intergovernmental Affairs, Infrastructure and Communities. “This operation demonstrates JCCBI’s and their partner’s innovation and regard for the environment, as does their recycling program, which will give a second life to the bridge materials.”

“The original Champlain Bridge has slowly disappeared from the Montreal landscape over the past 18 months,” said Sandra Martel, chief executive officer of JCCBI. “The deconstruction process has posed many technical challenges, including the complex and delicate task of lowering the main span. The teams at JCCBI and NHSL have all done excellent work not only at this stage but throughout this major project to minimize the impacts on the public and protect the environment while maintaining high health and safety standards for workers.”

Planning for the task of lowering the main span of the original bridge took nearly two years.

“Although this type of work is carried out occasionally around the world, it has never been done on this scale in Canada, especially in winter conditions and under the operational constraints of this project,” said Fabrice Guedon, project director at NHSL.

Before lowering the main span, work to reinforce the steel structure was done to maintain the integrity of the anchor spans and the long span during the descent. The teams also had to install special-purpose bearings before taking down the span.

The barge assembly holding the large span will be secured on the South Shore to await the dismantling of the span in the spring.

In the coming months, teams will take apart the cantilever sections that were attached to the main span and dismantle the anchor spans using cranes on the jetties and dike. These sections will be deconstructed chord by chord and then either recycled or reused.

After 18 months of construction, the Île des Sœurs abutment, 26 spans, 14 piers and four footings have been deconstructed, bringing the deconstruction project to 50 per cent completion, which is in keeping with the original work schedule.

A new Champlain Bridge opened to the public in 2019, just north of the original. One of the busiest bridges in Canada, it is used by more than 50 million vehicles in a typical year.