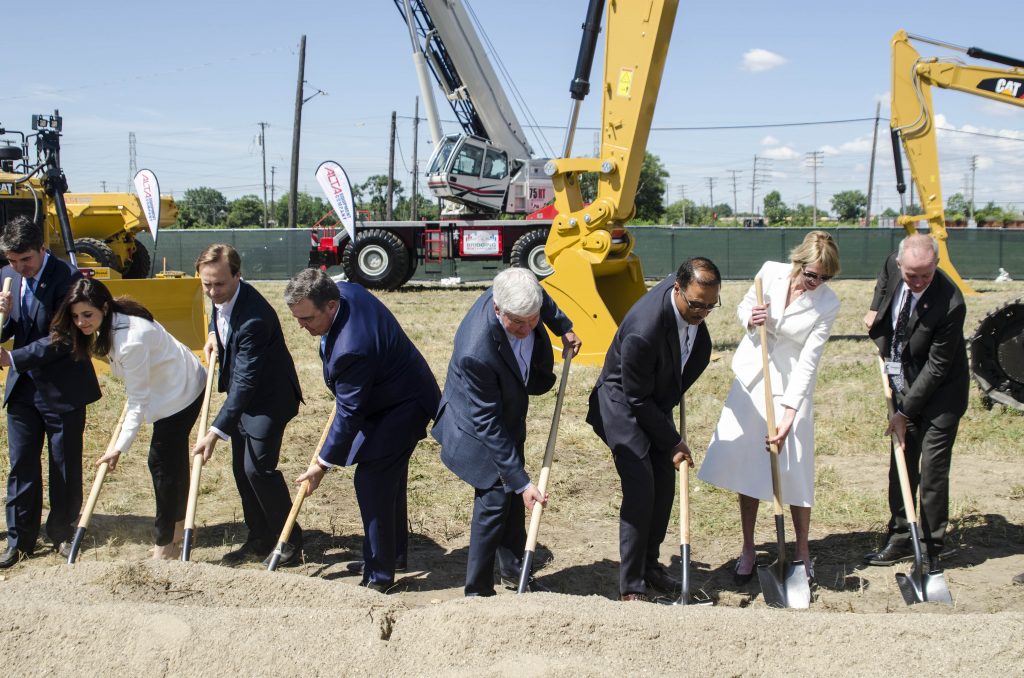 DETROIT—U.S. and Canadian officials touted the friendship between the two countries while acknowledging the economic benefits a new international bridge between Detroit and Windsor, Ontario, will bring.

A groundbreaking for the advance construction of the Gordie Howe International Bridge was held July 17 in southwest Detroit.

The six-lane, cable-stayed Canadian-financed span over the Detroit River is expected to provide direct connections to existing highway networks in Windsor and Detroit. Construction could start in earnest by early October. The bridge is scheduled to open in 2020.

“Make no mistake, we are starting to build this bridge and it’s going to be built and the people of the United States and Canada will be using it very soon,” Windsor-Detroit Bridge Authority Chair Dwight Duncan said at Tuesday’s ceremony.

The event took place as a trade spat between the U.S. and Canada—along with much of the rest of the world—continues to simmer. U.S. president Donald Trump has launched repeated salvos against various Canadian industries and the administration imposed tariffs against Canadian steel and aluminum imports earlier this year. Canada fired back with retaliatory tariffs last month.

Trump has also threatened tariffs against Canada’s auto industry, the source of many of the products moving across the Windsor-Detroit border. Overall, the trade corridor is the busiest commercial land crossing on the border between the U.S. and Canada, handling more than 30 per cent of trade hauled by trucks.

“The Gordie Howe International Bridge will play a vital role in supporting and growing the local economies on both sides of the border and will create opportunities for residents and businesses alike,” said Amarjeet Sohi, Canadian minister of Infrastructure and Communities. “This project is also an important symbol of our deep friendship and mutually beneficial relationship with the United States.”

Currently, the privately-owned Ambassador Bridge and the Detroit-Windsor Tunnel are the only commuter crossings between the two cities.

Michigan Gov. Rick Snyder called the Gordie Howe bridge an “economic engine” that will provide good-paying jobs. He also said a second span would provide economic security in the event of an Ambassador Bridge closing.

The Detroit International Bridge Co. which operates the Ambassador Bridge has been unsuccessful in suing to stop the future construction of the new bridge.

The company has been seeking permits to build a six-lane replacement span for the Ambassador Bridge. That span would be about two miles upriver of the Gordie Howe International Bridge.

The Gordie Howe bridge is named after the late hockey legend, who was born in Canada and grew up in Saskatoon, Saskatchewan. Most of his 26 years in the NHL were with the Detroit Red Wings. He died in 2016.

—With a file from On-Site Staff