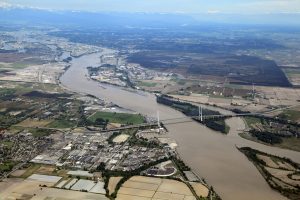 The Government of British Columbia has invited three pre-qualified bidding teams to participate in the Request for Proposals (RFP) stage to design, build, partially finance and operate the George Massey Tunnel Replacement Project. The total cost of the project is estimated at $3.5 billion.

The request for qualifications (RFQ) was posted through BC Bid and closed on Aug. 3, 2016. A thorough evaluation of the RFQ submissions was undertaken and the three teams selected to participate in the RFP are:

The finalization of the shortlist signals the completion of the RFQ process, which began on June 28, 2016. The RFQ process identified bid teams with the development, construction and financial capacity to undertake a project of this size and complexity. The ministry expects to have its preferred proponent chosen by summer 2017.

The new bridge and associated highway improvements, including dedicated transit lanes, will cut some commute times in half and also improve travel-time reliability for the 10,000 transit passengers and more than 80,000 vehicles that use the tunnel each day.

Safety benefits of the project include a design that meets modern seismic standards, additional lanes that make merging safer for all vehicles while reducing collisions by an estimated 35 per cent, and wider lanes and shoulders that will improve safety and emergency response times.

It is estimated that about 9,000 direct jobs will be created over the life of the George Massey Tunnel Replacement Project. Construction will begin in 2017 with the bridge opening in 2022, followed by tunnel decommissioning.