Crews set stage for ‘most active period’ at $5.7B Gordie Howe bridge 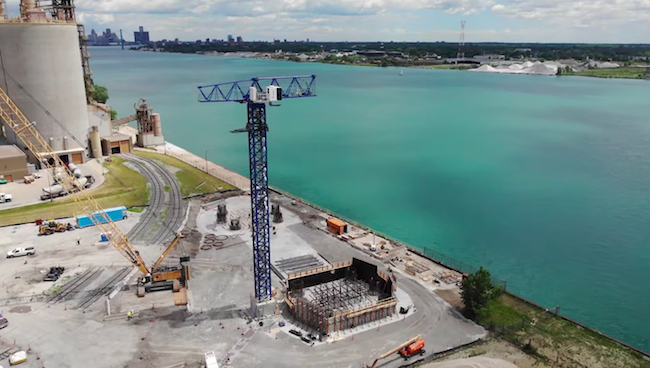 A pair of tower cranes, one on each side of the border, will help erect the bridge’s main 220-metre (772-foot) towers. PHOTO: WDBA/YouTube

Though the Canada-U.S. border has remained all but closed since March, construction of a new span between Windsor, Ont. and Detroit, Mich. has stayed on track to open to traffic by the end of 2024.

Work on all four of the main components of the new Gordie Howe International Bridge have progressed this summer in spite of the COVID-19 pandemic, positioning the build team to enter the busiest stretch of the project starting next year, the Windsor-Detroit Bridge Authority said in its latest update.

“Despite the need to change the way we all both live and work as a result of the COVID-19 pandemic, we have not slowed down,” Bryce Phillips, the crown corporation’s CEO, said in a Sept. 28 release.

The progress report marked the second anniversary of the project, with 24 months having passed since the the Bridging North America (BNA) consortium was awarded the $5.7 billion contract to build the new bridge over the Detroit River.

Phillips noted work on both sides of the border continued through the summer, albeit with heightened safety measures.

Construction on the bridge itself remains below ground, but has begun moving toward the surface. BNA — consisting of ACS Infrastructure, Fluor Corp. and Aecon Group Inc. — noted test shaft work for the bridge footings has been completed and that crews have already poured the first concrete for the main tower foundations.

The footings for each of the main towers will require approximately 1,900 cubic metres (67,000 cubic feet) of concrete. PHOTO: WDBA/YouTube

Each of the two 220-metre (772-foot) towers requires 12 drilled shafts, roughly 36-metres (118-feet) deep. Aaron Epstein, the CEO of BNA, said the footings for the towers on both the American and Canadian sides of the border will require about 1,900 cubic metres (67,000 cubic feet) of concrete and 444 tonnes (97,000 pounds) of rebar. The backspans for the bridge will be supported by an additional six drilled shafts.

Meanwhile, early work is also underway on both ports of entry. On the Canadian side, crews have finished installing approximately 133,000 wick drains to help consolidate soils and begun both earthworks and utility installation activities. Across the river, site prep milestones such office trailer installation, fencing around the perimeter and ground clearing have been completed. Major earthworks activities have also commenced, with crews having placed approximately 550,000 metric tonnes (1.2 billion pounds) of fill and surcharge material to date.

Construction on the Michigan Interchange, the final main engineering component of the bridge project, has advanced considerably as well. Three road bridges and five pedestrian bridges over Interstate 75 have been torn down to make way for the new interchange. The WDBA said the focus of the next few months will be on rebuilding the road bridges. They are scheduled to be complete in spring 2021.

The progress on both sides of the border sets the stage for the “most active period” of work on the project, which will begin next year. About 70 per cent of the total work hours required for the bridge will fall between 2021 and 2023.

Watch a video wrap-up of the September update: