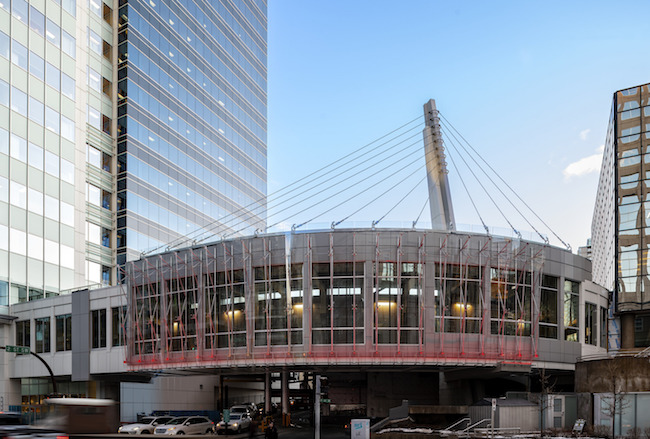 The biggest challenge on construction projects isn’t always the complexity of the build. More often than not, the compact nature of a site, logistical issues or coordinating traffic present equally forbidding obstacles.

A multimillion-dollar project to build the latest addition to Calgary’s Plus 15 pedestrian bridge network was just such a case.

More than 10 years in the making, Morguard Real Estate Investment Trust and EllisDon Corp., the general contractor for the build, wrapped up work on the curved 60-metre footbridge that connects Penn West Plaza on 9th Avenue to adjacent Gulf Canada Square last fall.

Like the other 82 bridges in Calgary’s aptly-named Plus 15 skyway system, the new span is about 15 feet (4.5 metres) above street level. Unlike the others, it’s privately-owned and runs above the entrance to a busy parkade.

Erecting the elevated walkway without shutting down the parking garage or closing the sidewalk — all while ensuring CP Rail had access to their tracks that run behind the property — was likely the toughest part of the job, according to Frank Giugovaz, the general manager of Operations at Morguard.

“The biggest challenge, honestly, was just the traffic,” he said in an interview last fall. “You know, putting up the cladding on the exterior, the glazing, there’s people walking around and there’s all kinds of crazy, wild and wonderful things happening during the day.”

Construction on the project got underway in March 2018 and the skyway opened to foot traffic in July 2019. Crews cleared up a few deficiencies and installed the final exterior finishes last fall. Altogether, crews incorporated 245 pieces of structural steel for the bridge’s beams, channels and columns. 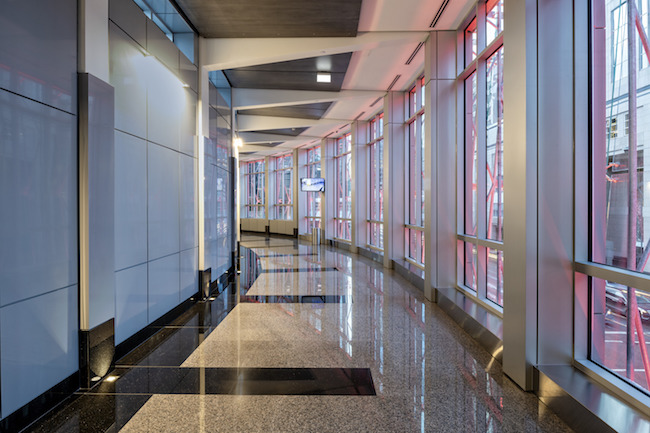 The interior of the latest addition to the Plus 15 walkway network. PHOTO: Morguard

The latest addition to the Plus 15 system has been a long time coming.

Morguard purchased the two-tower Penn West Plaza complex in 2012, two years after construction on the larger of the two buildings was completed. With the acquisition, the Mississauga, Ont.-based real estate firm inherited the former owner’s commitment to connect the buildings to the skyway system. Before work could start, however, it needed to hammer out an agreement with the City of Calgary, CP Rail, the Calgary Parking Authority and neighbouring Gulf Canada Square. It took until 2018 for all parties to come together.

“There was limited laydown area, which meant they couldn’t bring a lot of material to the site, so it was sequenced with deliveries and cranes,” Giugovaz said. “So, there was after-hours work, weekend work with some of the critical items like the structural steel that is a big part of the bridge design.”

Because of the limited amount of space, crews also assembled the bridge using small pieces that were easier to manoeuvre than lengthy segments. The largest single piece used in the project was the steel mast, weighing in at about 17,000 kilograms (about 37,000 pounds). 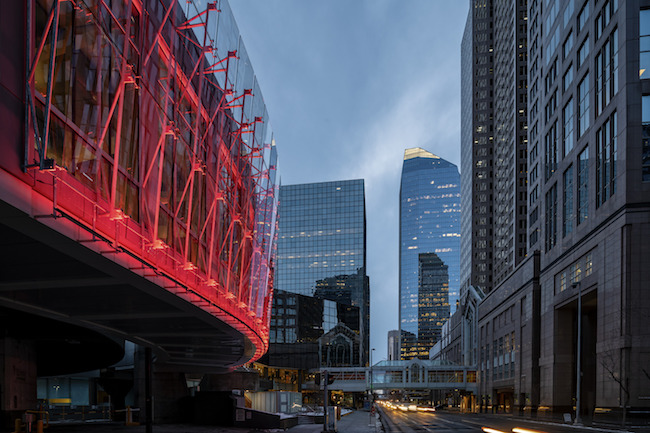 LEDs ring the exterior of the new bridge (left). Another span in the Plus 15 network, which crosses 9th Avenue, is visible in the centre. PHOTO: Morguard

Despite the mast’s appearance — with a cabling system resembling that of a cable-stayed bridge — Giugovaz noted the suspension-like system is “purely architectural.”

“There’s no structural integrity to those cables,” he said, adding that the fixed concrete and pier support the structure. Also for appearances’ sake, the bridge has LEDs lining part of its exterior.

With the new bridge in service, Calgary’s Plus 15 network includes 83 bridges and close to 16 kilometres of sheltered skyways. Each work day, tens of thousands of walkers use the system to get to meetings, restaurants and coffee shops while staying out of the sometimes-punishing Calgary elements.