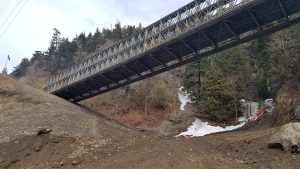 A modular steel bridge has been installed to provide temporary access for Highway 1 traffic through the Fraser Canyon in British Columbia. The bridge, manufactured by Acrow, an international bridge engineering and supply company, replaces a section of road damaged during heavy rains in November 2021.

While the B.C. Ministry of Transportation and Infrastructure (BC MoTI) was able to quickly open many of the damaged sections of the highway or reroute traffic with detours, it was not able to do so at the Jackass Mountain location, states a release from Acrow. To ensure that traffic could flow, BC MoTI and contractor Coquitlam Ridge Constructors opted to use an Acrow modular steel bridge. The plan is to use the structure until options for a permanent solution can be considered.

The site has extremely steep terrain and carries the risk of further geotechnical hazards, requiring a complex design and construction process to ensure worker safety and the success of the project. At the same time, it was mandatory that environmental and cultural protocols were considered and followed at every stage of the restoration work.

The single-lane Acrow bridge selected for the project is 79.25 meters (260 feet) long with a roadway width of 4.2 metres (13.78 feet) and a TL-2 guardrail system. Extensive site preparation included stabilization work and road and bank reconstruction ahead of the launch of the temporary bridge in January. The bridge officially opened to traffic on January 24.

“Acrow bridges are easily transported to the most difficult locations, and quickly and easily built and installed, making them ideal for emergency applications,” said Gordon Scott, director of operations and sales at Acrow Canada.