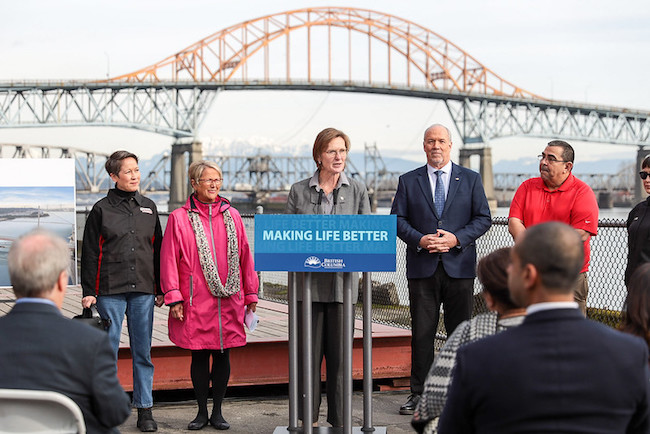 Claire Trevena, B.C.’s minister of Transportation and Infrastructure and Premier John Horgan made the contract official at an event alongside the Fraser River Feb. 10. PHOTO: Province of B.C.

Construction firms Acciona and Aecon Group Inc. have firmed up a $967.5 million contract to build a new four-lane bridge to replace the aging Pattullo Bridge between New Westminster and Surrey, B.C.

The province’s Ministry of Transportation and Infrastructure singled out the Fraser Crossing Partners as the preferred proponent for the project last December, and at a riverside event Feb. 10, officially finalized the contract with the Acciona and Aecon joint venture.

“The current bridge has needed to be replaced for years, and I’m proud our government is getting it done in a way that benefits the local community with good jobs and training opportunities,” John Horgan, B.C.’s premier, said in a release.

The price tag for the cable-stayed bridge totals $1.4 billion, factoring in the nearly $1 billion in construction costs, as well as other aspects of the work, such as project risk management and property acquisition. 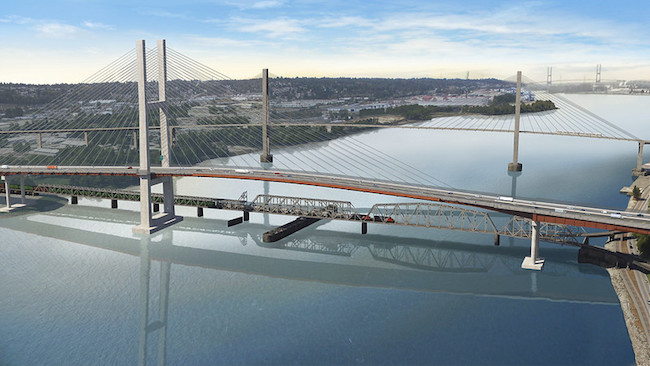 A rendering of the new four-lane bridge over the Fraser River. PHOTO: Province of B.C.

Early construction is scheduled to get underway in the Vancouver area shortly and run through 2023. Along with erecting the bridge itself, the project includes connections to roads in New Westminster and Surrey, grade separations on Highway 17 and the teardown of the more than 80-year-old Pattullo Bridge.

The replacement bridge of the same name will have four lanes, but the design leaves the door open to expanding it to six lanes in the future. A number of local advocates have been pushing for the wider span to keep pace with the area’s growing population.

The build team will be aiming to complete the new Pattullo Bridge by 2023. Once the new Fraser River crossing opens, demolition crews are expected to take about two years to remove the old through arch bridge.