For years, bright orange paint has ringed potholes in north-central Newfoundland. For years, locals and tourists alike assumed the province was behind the colourful warnings 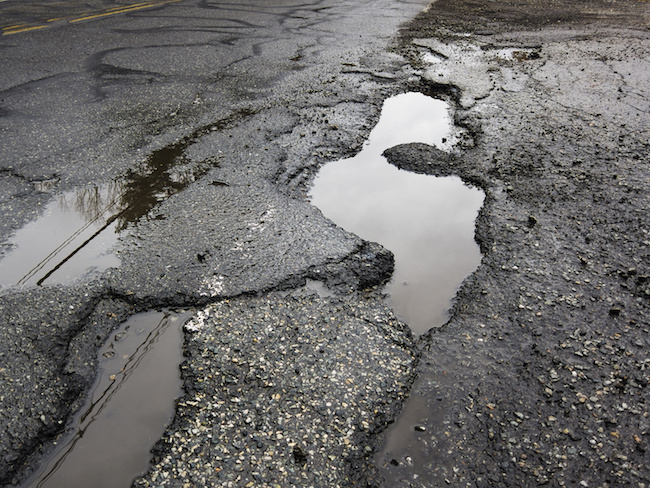 Newfoundland’s roads are notorious for potholes. The north-central part of the island is no exception

TWILLINGATE, N.L.—For years, drivers along Newfoundland’s Road to the Isles thought the orange circles around the highway’s notorious potholes were put there by the Department of Transportation.

The spray-painted markings were actually the work of Ernest Barnes, the “Pothole Man.”

The 70-year-old resident of Summerford, N.L., has made it his mission to keep drivers safe by drawing attention to the holes in the road.

“All the tourists I’ve talked to, they really love Newfoundland and the people of Newfoundland,” he says. “But the roads, they don’t like.”

Barnes hits the highways along the province’s north coast for four to five hours every day, looking for potholes to paint.

He’s already covered an area from Twillingate to Lewisporte, paying close attention to Port Albert, where tourists travel to take the ferry to picturesque Fogo Island.

As a motorcycle rider, Barnes says he’s particularly concerned for riders who could be injured, and for tourists who aren’t prepared for such rough roads.

Barnes has been spray-painting potholes for years, but he says this year’s crop is particularly large—he’s already emptied about two dozen cans of paint, and he’s cleared the local hardware store of its stock.

It might seem like an expensive enterprise for a senior, but as word of Barnes’ safety crusade has spread, others have stepped in to help.

Some supporters have approached Barnes in parking lots and out on the road to offer change and paint to help with his cause.

The provincial Transport Department says road repairs in the area will be carried out over the next three years. In an emailed statement, the department said maintenance on the province’s roads is arranged on a priority basis.

“Residents taking it upon themselves to mark sections of the highway for repairs pose potential safety risks to themselves and other motorists, and the department does not condone this activity,” spokesperson Brian Scott said in an email.

But Barnes isn’t concerned about his safety. He says the government should direct its attention to the motorists at risk when driving on uneven roads.

“I still have eyes, and I’m not deaf so I can hear the vehicles, and I do have a vest that I can wear, a safety vest,” said Barnes. “I’m gonna die sometime, so if I get killed, well at least they can say he was trying to help someone else, right?”

Now that his identity as the highway’s pothole protector is out, drivers sometimes honk their horns and stop to thank him. Last week, one woman pulled over to hand him a can of paint.

Barnes has been marking potholes all spring and summer. He says he’ll keep at it as long as he has the means.

“As long as people are donating paint and donating a few dollars to buy it—because I can’t buy it on my own. I’m only a senior, right? And there’s only so much money you’ve got and you can spend.”


Related Stories
There’s no big cure for the ‘pothole blues’
Maintenance isn’t ‘sexy’: Underfunding, bad repairs, cited for why Canadian roads are breaking down
ORBA calls for safe driving in construction zones
Roadwork improvements made for Newfoundland and Labrador