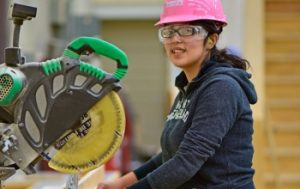 Last January, 38-year-old Diane Logan did what she describes as a complete 180. After 10 years as a secretary, she traded in her office wear, layered up in two pairs of long johns, a parka and quilt-lined hardhat and headed out to work as an electrical apprentice. Logan was hired by Willbros Canada to work at a modular yard in Nisku, Alta. While there were some bitterly cold days when she wondered if she was doing the right thing, Logan says she didn’t second-guess for long.

“It was hard work, but I absolutely loved it. I wanted to feel that I’d achieved something at the end of the day. Working in the trades gives me a huge sense of accomplishment, and the feeling that for the first time I have a real career.”

Just over 300 kilometres away, Lori Blanchette, also 38, is building and dismantling structures for KBR Wabi at its Fort Hills extraction project. With a little coaxing from her brother, she made the career move from payroll clerk to scaffolding apprentice nine months ago, something she wished she had done sooner. Blanchette’s advice to women thinking about the skilled trades is simple.

“Stop thinking about it, and just do it. Work hard, be determined and you will succeed.”

As members of the Progressive Contractors Association of Canada, Willbros and KBR Wabi are among an increasing number of construction companies making a concerted effort to attract more women to their skilled workforce. PCA encourages its member companies to hire, train and mentor women by forming partnerships whenever possible with Women Building Futures. PCA is a strong supporter of Women Building Futures, a leading organization that provides women with the basic training they need to get started in the skilled trades. Since March, KBR Wabi has hired 16 women through Women Building Futures.

“With as many as a quarter of a million construction workers retiring this decade, construction companies want and need women to help fill that skills vacuum,” said Darrel Reid, vice-president of policy and advocacy at the Progressive Contractors Association of Canada. “Never has there been a better time for women to launch careers in the skilled construction trades. The opportunity is definitely there.”

While the number of women in construction is growing in Canada, the proportion of women who make up in the skilled trades workforce remains at about 4 to 5 per cent.