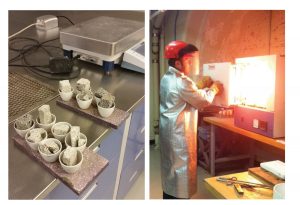 Boehmers is a concrete block producer in Cambridge, Ont. with a new, carbon-dioxide (CO2) infused product said to be great for the environment and superior to traditional concrete blocks. The company has been selling the Carboclave block, as the product is called, for a little over a year, earning praise from contractors and industry associations.

Manufacturing concrete and cement generates large amounts of environmentally-damaging CO2. For decades, researchers have talked about using captured CO2 to enhance the curing process to make better concrete. The Carboclave block is one of the first commercially viable products to successfully use this procedure. Each Carboclave block sequesters roughly 0.5 pounds of industry-recovered carbon-dioxide per 20 cm unit.

“The Carboclave block is a regular concrete block [that goes through] enhanced curing with CO2. The CO2 is absorbed or sequestered into the block and reacts with calcium ions to create a calcium carbonate,” explains Boehmers president, Paul Hargest.

The Carboclave curing process consumes less energy than conventional steam curing. As a result, Boehmers has been able to drastically reduce the amount of natural gas it uses during production, which in turn has reduced the company’s carbon footprint.

No wonder Hargest calls the Carboclave blocks “the greenest products in the marketplace.”

In operation since 1875, Boehmers currently has about 20 employees and five pressure vessels for autoclaving purposes.

The Carboclave block is the result of a collaboration between Boehmers and McGill University of Montreal that began roughly a decade ago.

At the time, McGill’s civil engineering department was interested in “exploiting CO2 as a curing mechanism” for concrete, says Zaid Ghouleh, a research associate at the university.

Hargest, meanwhile, was concerned about the environment and potential regulatory changes and looking for an alternative to autoclave curing. McGill got in touch with Hargest. After some discussion, Boehmers became McGill’s industry partner in a project involving CO2 and the concrete curing process. In 2009, the project was awarded a three year National Sciences and Engineering Research Council of Canada (NSERC) grant worth roughly $450,000.

McGill provided technical support, supervision and laboratory space for R&D, says Ghouleh, a PhD student at the time and one of several university personnel involved in the project. Hargest contributed his facilities plus roughly $200,000 of his own money. Some of these funds went to buy new equipment, such as a liquid CO2 tank.

“From 2009 – 2015, it was in-house testing, lab testing and small-scale testing, just to ensure we were on the right track with everything that we were doing,” states Hargest.

Proof of concept was done in a lab while trial runs were made at Boehmers. Once the research phase successfully concluded, Hargest took charge of commercializing the product. In December, 2015, he commissioned the first full production run of Carboclave blocks at Boehmers. He brought the product to market a few months later. Hargest, who has a patent on the Carboclave curing process, is spearheading the introduction of the blocks to North America’s construction sector.

Hargest buys his CO2 from a company called Praxair, which in turn captures it from industrial facilities in Southern Ontario. Praxair refines the carbon-dioxide, liquefies it then sends it to Boehmers. Hargest turns it into a gas form before using it in his curing process.

According to Boehmers’ president, Carboclave blocks are stronger (“between 30 and 35 MPa” or roughly double minimum CSA Group standards, says Hargest), denser and less prone to chipping than conventional blocks. They also have improved freeze-thaw resistance and reduced sorptivity/permeability, says Hargest. Carboclave blocks are slightly heavier than conventional blocks and harder to cut. This is an advantage claims Hargest who says, “When you do cut them, it’s like cutting glass. You get a real nice straight line.”

Hargest is finishing up a few existing orders then switching completely from autoclave to Carboclave curing. At full production, Boehmers can produce nearly 20,000 blocks a day.

In addition to being eco-friendly, Carboclave blocks are good for the bottom line.

“It’s less expensive to produce and it retails for the same price [as traditional concrete blocks]. It should enhance my margins by a little bit … What it allowed me to do was eliminate my gas consumption. In 2015, I burned over one million cubic metres of natural gas. Starting next week, I’ll burn zero in production,” he states.

Needless to say, this reduction has meant significantly fewer CO2 emissions going into the atmosphere.

“It’s safer for the workers in the plant. When I used silica, no matter how many controls you have in place and how clean you keep the plant, you still get airborne particles which we had to monitor every year for. We had to send our employees for chest X-rays and inhalation tests on an annualized basis just to make sure there wasn’t any early onset of Silicosis which is caused by Silica,” says Hargest.

Hargest has received industry recognition. In March, 2017, the Canadian Construction Association (CCA) honoured Boehmers with its 2016 CCA Excellence in Innovation Award, for its efforts with the Carboclave block.

The CCA aren’t the only ones who are impressed.

Gary Kappeler, facilitator at Konia Masonry Corporation in Waterloo, Ont., says his company has been using Carboclave blocks since May, 2016.

“To date, we have completed seven projects using the Carboclave block and are starting another eight projects over the next two months,” says Kappeler.

Completed projects, all based in Southwestern Ontario, include condos, an apartment for seniors, a university stadium, an arena, etc.

“The product has many benefits from both the productivity and marketing perspectives for our firm and the industry in general. Productivity: excellent quality related to material consistency and tolerances resulting in improved productivity. Minimal remediation time required due to chippage resulting in contractor cost savings. Marketing: This is the most innovative development in the concrete block manufacturing industry to date,” states Kappeler.

He also notes that Carboclave’s “improved compressive strength provides the opportunity for the engineering community to build higher and/or consider the product for use in other applications thereby creating additional market share opportunities…There is no cost variance to the end consumer…We will continue to use the Carboclave product as part of our company standard.”

Back at Boehmers, Hargest hopes the Carboclave block becomes standard across the construction industry.

While he sells the product directly to some dealers and contractors, Hargest is looking to license the technology involved in making Carboclave blocks to other companies.

“I have other producers within the marketing area in Canada and a couple in the U.S. interested in the technology. So I expect moving forward that I will probably enlist those people to produce the same way that I am. Hopefully, the block industry overall will become a carbon sink for other industries, while manufacturing a far superior product than is currently made with regular concrete today,” he states.