Despite the boom in GPS, contractors are cautiously entering the market 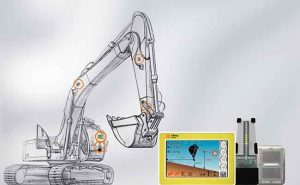 The uptake of GPS technology in machine controls has skyrocketed in recent years. According to an advisory board to the U.S. government, the adoption rate of GPS among machine control industries overall has been driven largely by costs and benefits. Between 2005 and 2010 the unit price for GPS technology dropped to roughly US$13,000 from US$20,000, while manufacturers’ revenues rose from US$320 million to US$551 million over the same period.

In other words, the costs of adopting GPS technology have dropped, in turn driving up manufacturers’ sales and revenues. What’s puzzling is that the same report showed that based on an 8 to 12 per cent share of construction for earthmoving operations, GPS had a modest adoption rate of 20 to 25 per cent among companies with sales more than $250 million—this despite an 18 to 22 per cent benefit to those companies’ operations.

Some manufacturers believe contractors have been slow to adopt GPS due to a lack of understanding surrounding the technology. Others think those numbers can be improved through innovations and patience. Still others say we’re missing the overall picture about what role GPS can legitimately play and how other technologies will fill that out.

Geomax’s regional manager and machine control manager Bryan Garner pulls no punches: Have GPS machine controls eliminated manual grade checking altogether? Not on your life, he says. How about GPS’s other boast: reducing the six or seven passes needed to get to grade two or three? Not much new there, he replies. Still need assistance working to really fine grade tolerances like those on airport runways? “Yup. GPS is still about the same; you can’t get to really close tolerances without total station robotics.”

Peter Robson, Komatsu’s director of intelligent machine controls, agrees with Garner on manual grade checking. “As the saying goes: ‘You can stake less, but you won’t become stakeless.’” Robson offers this caveat, however: success, using GPS will increase with increased operator efficiency. “If you’ve cut to your grade, for example, and the machine says you’re on target and you’re running over it again you need to ask yourself why? You need to know when you’re done.”

Evidence Komatsu has been learning its own lessons became clear in January when it drew contractors’ attention to its placement of GPS controls on its second generation D61EXi/PXi-24 Intelligent Machine Control crawler dozer. It senses blade load from on board GPS sensors instead of on the blade, and it has eliminated the cables and connections operators have to climb over at the beginning and end of their work day. This saves wear and tear on the cables and the machine itself, reducing the potential for downtime.

An even bigger deal, says Robson, came in May when Komatsu scaled up its intelligent machine control technology to make the PC490LCi-11 the world’s largest 3D semi-automatic construction-sized excavator. “Previously all you could put on an excavator was guidance,” says Robson. “It slowed people down because they always had to pay attention to the screen and wait for sensors to stabilize.” When the bucket on a 50 tonne PC490LCi-11 reaches the target surface, automation kicks in to limit over excavation, explains Robson. “This will allow you to go straight to grade.”

It’s always how you do a thing that matters

In 2013 the sales engineering manager for Trimble Navigation Lamar Hester insisted the uptake of GPS would increase in the next five to six years. Today, we’re still on schedule Jeff Drake says. Trimble’s segment manager for Machine Control Systems points to an albeit modest increase in the adoption rate for asphalt pavers and rollers, for example, but also excavators, which historically have lagged behind in the field in GPS adoption.

Drake credits the “few extra points” in GPS uptake in construction to a willingness to double down on the technology’s potential. In Trimble’s case it is meant quite literally, doubling up its GNSS-based system to two GPS receivers mounted on each blade corner of its dozer products. “This provides more complete data measurement along the blade including acceleration as well as blade angle, higher display resolution and more precise operator control,” says Drake.

This is especially advantageous for complex design surfaces such as super-elevation grading tasks, says Drake. Real-time GPS positioning tells you where the blade is, in turn providing the operator with accurate cut-fill values. “In the control portion of the system once the operator flips the automatic switch, the system will drive the blade to that design grade also visible in the cab.”

It’s not all about GPS

It’s one thing to grade to 30mm on a subgrade and stone grade using GPS, quite another to fine grade to 5 or 10mm using GPS all by itself. Nor is it always sufficient to supplement it with laser guidance to get close tolerances required by the job. Along with Geomax’s Zone Laser Rotator Series its flagship product Zoom90 Robotic Total Station was designed to do what GPS alone cannot do, dramatically minimize the time for surveying grade. For its part, Leica Geosystems focuses its attention on the capabilities of optical, tripod mounted robotic total stations to see around and over obstacles such as tree lines and concrete trucks.

The wow factor, if it comes in anywhere, says Leica Geosystems’ segment manager, NAFTA Machine Control, Magnus Thibblin, is in how we refine the way different machines, rovers and site offices are connected so that job site activities and productivity are precisely tracked and measured. “We have best-in-class sensors on a range of machines, for example, but I don’t believe a specific product on site is what the contractor should look at. Contractors should look at the job site overall and then invest in the solutions that will empower them to control the variables and eliminate guesswork.”

Increasingly, this means exploring innovations such as the Leica Nova MS60 MultiStation, which combines precision 3D scanning and a total station in a single solution, says Thibblin, significantly improving the amount of intelligence provided to the construction team. “When you can both scan and accurately measure with a total station, you are opening up a lot of possibilities,” he says.

“You can now easily capture volumes, stockpiles, the inside and outside of buildings, and track progress during the day or week.” This capability provides a substantial advantage not only on horizontal construction, says Thibblin, but also on vertical construction, providing contractors with more job site flexibility.

Another innovation, the Leica Pegasus:Backpack, is transforming site walkthroughs into as-built quality assurance checks by capturing rich 3D data as part of the general workflow. Unmanned aircraft systems (UAS) like the Aibot X6 can be used to quickly capture high-resolution topo maps of the construction site while hovering to inspect difficult-to-reach assets; and laser scanning solutions such as the Leica ScanStation can quickly capture a vast amount of millimeter-accurate data from the ground at the touch of a button.

As live data flows throughout the construction process, teams work quickly and with confidence, Thibblin adds. “The ability to identify and correct errors early on reduces rework, maximizes efficiency and increases productivity.”

Looking down the road

Will GPS see greater uptake? Count on it, says Jeff Drake. One problem: the pool of experienced equipment operators is shrinking as they retire and are not being replaced quickly enough. But that, says Drake, could actually stimulate improvements in technology design and technology adoption over the next three to five years.

“So I think we’ll have to introduce a lot more sophistication inside the cab in terms of what guidance operators will be looking for over time. Not just in terms of what they see on the on-board computer, but what level of machine automation will take place.”