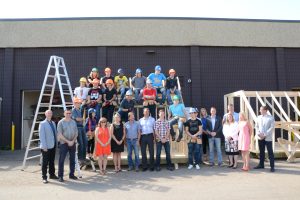 Edmonton – These have been anything but the lazy days of summer for 18-year old Phoebe Janela Tagumpay. While most summer camps fill up quickly with students keen on hiking, canoeing and swimming, Tagumpay has been roofing, framing and flooring. She’s one of 16 Edmonton high school students who jumped at the chance to sign up for CLAC’s first summer construction boot camp and the opportunity to build greenhouses.

“It really was an incredible experience,” said Tagumpay. “It was my first exposure to construction, using tools and skills that I’ve never used before.”

Tagumpay, who lives on the south side of Edmonton, was up at 6:00 am each day to catch a bus to the north side of the city for the two-week program. While it ran from 8:00 am to 4:00 pm at a district high school, she often arrived before the official start.

“I didn’t mind the early mornings because I loved what I was doing,” added Tagumpay. In fact she and the other students were so dedicated that they returned for five days after the boot camp ended to finish the project. The students built four greenhouses, two of which have been donated to local schools for sustainability projects, and the others sold with the proceeds going to charity.

“The boot camp was a great way to introduce young people to the trades,” said Brad Bent, CLAC’s director of training – Alberta. “We wanted them to see that the trades open up all kinds of career possibilities.”

The camp succeeded in making a lasting impression on Tagumpay. She was considering a career in business administration but now plans to pursue construction-engineering technology at the Northern Alberta Institute of Technology.

The summer boot camp, in conjunction with the Edmonton Public School Board and Merit is an extension of CLAC’s High School 2 Hard Hats program that began in 2011. Since then, CLAC has introduced hundreds of high school students to new skills including welding, carpentry, scaffolding, and electrical. CLAC’s goal is to expand its program through partnerships in each province to expose as many students as possible to the skilled trades.

CLAC is the labour partner of the Progressive Contractors Association of Canada.

“CLAC is a leader in the kinds of innovative programs and training that are renewing the workforce of tomorrow,” said Darrel Reid, VP of policy and advocacy at PCA. “With up to a quarter of Canada’s construction workforce retiring this decade, we need to do everything we can to show the next generation the benefits of a career in the skilled trades.”